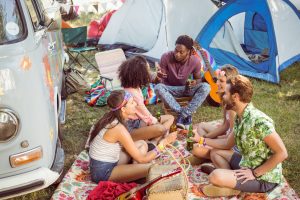 How are you spending the last Bank Holiday weekend of the summer?
Heading to a festival? Doing a spot of DIY? or just trying to catch up on some sleep & boxsets?

Did you know that this summer Bank Holiday has been around since 1871?! It was originally intended to give bank employees the opportunity to participate and attend cricket matches. I might give the cricket a miss but at least it looks like it will be nice enough weather to get outdoors.

Personally, I wouldn’t mind a bit of glamping, but if solar showers, campfires & lack of wifi aren’t to your taste here’s a small selection of fun activities going on this weekend.

There are so many other events going on all over the country so keep an eye out in your area. You may well want to keep it local too as experts are warning of a so-called ‘carmageddon’ with an estimated 20.7 million vehicles expected to hit the roads.

Speaking of vehicles, will Matt’s buggy ever make it to the beach?

However you’re spending the long weekend why not try something truly unthinkable & turn off your mobile (I’ll allow you to take photos or play music on it). I know, I know, there are Pokémon to be caught, but just try it. Get together with friends, or family, or both and have a laugh!